The one thing that people have wanted to know most of all throughout human history is to reach beyond the here and now and see what the future holds. It is not hard to imagine why: knowledge of the future would help people make better decisions or know that things would work out for the best. Trying to look beyond the present is something we still do today: looking at the weather forecast or reading predictions about the stock market is, in the end, not fundamentally different from how people in the middle ages tried to know whether their harvest would succeed, or whether a business investment would pay off. Techniques have changed, people’s motives have not. Neither has the reliability of attempts to read the future.

The future is, after all, not for humans to know but was (and for many people still is) the territory of gods or a God, and they kept their plans largely hidden. Largely, but not completely: throughout time, divine beings everywhere were known to send signs of their intentions. Whoever knew what to look for, would be able to decode such divine messages and use this knowledge to their advantage.

What exactly these signs looked like varied over time and place: it was believed that the gods or God communicated via birdsong, thunder, dreams or an animal’s liver. The meaning of such signs was often written down, so that it became possible to look up how one should interpret them. These texts, our main evidence of people’s attempts to know the future in the (distant) past, are known as prognostics. Prognostic texts are attested as early as the fourth millennium BCE and are still produced today all over the world, for instance in the shape of horoscopes.

The Salomon project is a collaboration between historians and students of history of Dutch and German universities. It is an attempt to make complex historical sources accessible to a wider academic audience through the use of open digital presentation methods.

The prognostic table of Salomon

Our project concerns one rather special prognostic text from the early middle ages: the ‘prognostic table of Salomon’ (Tabula pronostica Salomonis), which is the first name it was ever given in a Latin manuscript from the thirteenth century. The oldest Latin copy we have is some two hundred years older, and there is good reason to believe that the direct predecessor of this eleventh-century version was an even older Arabic text.

The way in which the Table offers knowledge of the future is unique for medieval prognostic texts we know from manuscripts produced in the Latin West. It works on the basis of unexpected incidents, things that happen out of the blue: a mouse squeaking somewhere in the house, a person who gets a sneezing fit, the fire crackling loudly. Each manuscript with the Tabula contains a lists of such incidents. What exactly they mean, however, is dependent on a second element: the current sign of the zodiac. As the manuscripts on this website show, it is probably this combination of two elements which makes a table such a convenient way of organising knowledge: with the incidents on one axis and the signs of the zodiac on the other, the user found the appropriate prediction by reading the text in the square where both conditions met.

On this website, you fill find three of the earliest manuscripts of the Table of Salomon which represent the first phase in a much longer history of this text.

The prognostic table of Salomon is available in three different versions. The first one is meant as an introduction to the manuscripts and the Table itself, the second serves as a guide to interpreting the Table’s contents and the third, finally, offers a transcription of the Table in Latin and a translation into English.

For ease of use, first read these brief instructions 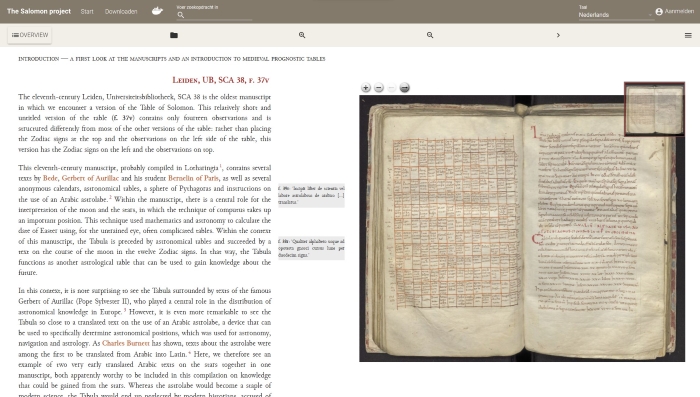